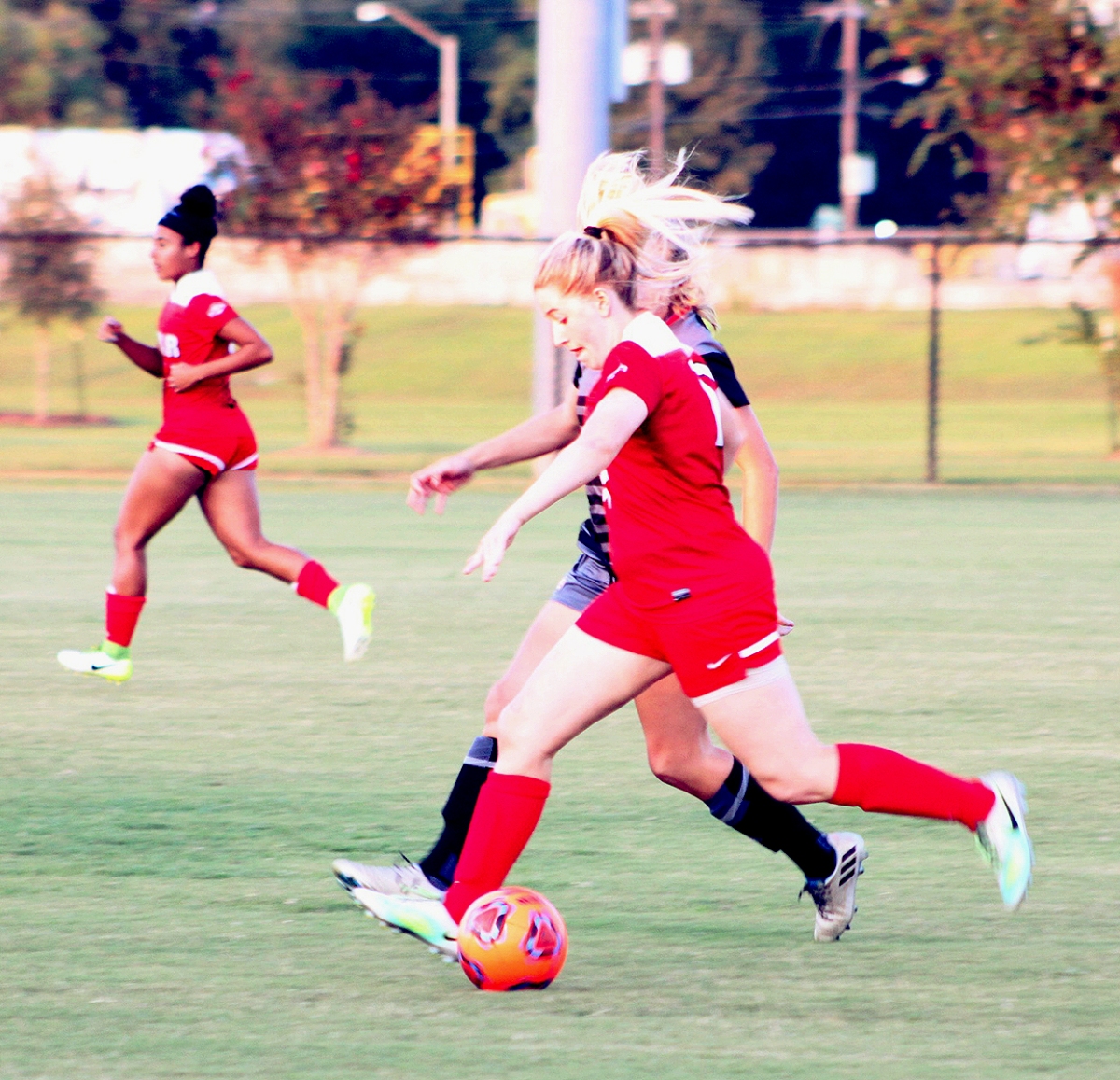 After a sc­­­oreless draw against the University of Houston, following a three-game winning streak, the Lamar women’s soccer team returned to the win column by beating Nicholls State University 3-1, Friday, at the Lamar Soccer Complex, in their Southland Conference opener.

The Lady Cards have played Nicholls for the conference opener three seasons in a row.

The team’s current 6-2-1 record is an exceptional accomplishment.

“As a team, we learned from last year’s mistakes,” associate head coach Henry Zapata said. “The ladies have put in so much hard work and I think it’s paying off.”

This was the first of 12 games leading to the Southland Conference Tournament in November.

“We’re hoping to make it to the tournament,” midfielder Ana Moreno, Bogota, Colombia senior, said. “We have been playing really well this season and we’re in it to win it.”

0-0 tie. The Lady Colonels kicked off but most of the first half was spent in their half with the Cards relentlessly pushing toward the goal, but the first half ended scoreless.

“We had our chances in the first half, but we couldn’t finish,” head coach Steve Holeman said. “(Nicholls) kept fighting, and had good passes.”

The Cards were close to scoring a goal seven different times in the first half, but the Colonels’ defense kept them at bay. However, within four minutes of the second half, forward Kelso Peskin, Cape Town, South Africa junior, scored the game’s first goal for Lamar, which was quickly followed by her and the team’s second goal.

“We showed the other teams that we’ll play that we’re capable of winning,” midfielder Samantha Moreno, Mexico City, Mexico senior, said. “That’s why (Friday’s) game was so important for us.”

“Our teammates our like family to us,” Ocampo said. “When one person succeeds, we all succeed.”

Friday was also International Players Appreciation night, honoring the eight women on the team who originate from outside the United States.

“We wanted our international students to come out and support the team,” Zapata said. “Our team is very internationally oriented. We have players from Norway, England, Colombia, Mexico, etc. It’s a good opportunity for the community to come together and support our teams.”

Several international fans in the crowd showed their support for their teammates.

“Our families can’t be here and we’re far away from home,” Ana Moreno said. “To see other international students at our games gives us more confidence and we play better.”

The Lady Cardinals play their next conference game against the University of Central Arkansas, Sept. 22, in Conway, Ark.

“The ladies played as a unit, which is why they performed so well,” Zapata said. “If we keep playing like we did (Friday), I know we’ll make it to the end.” 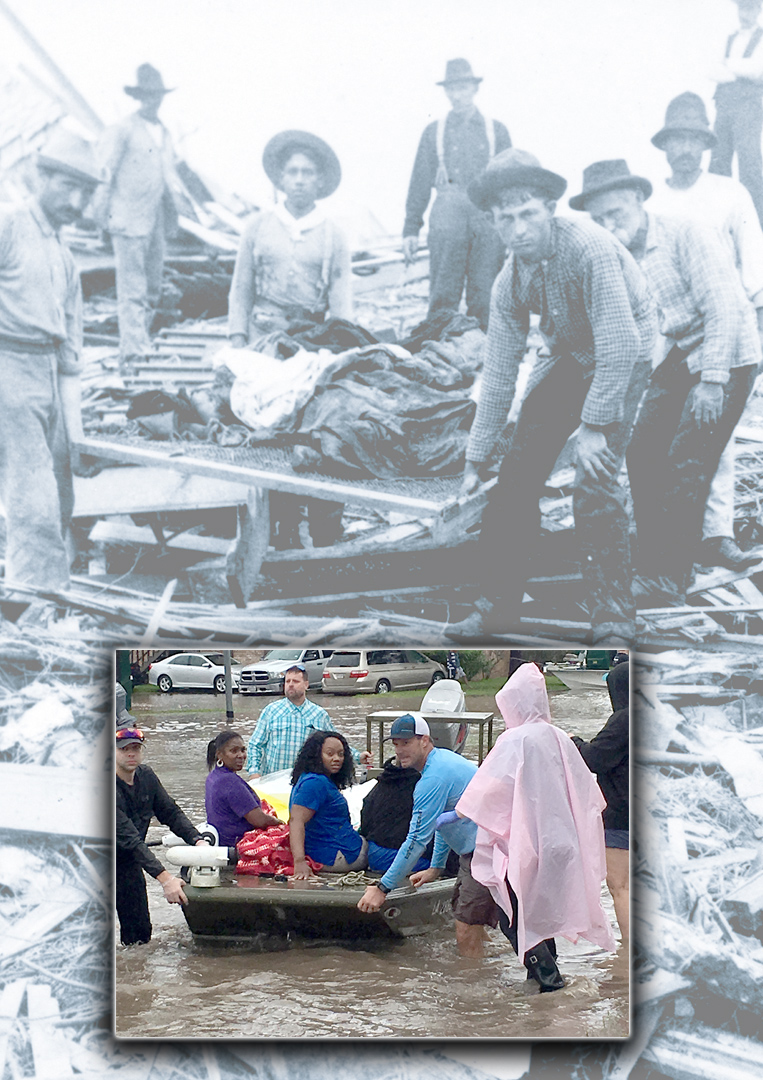 The potential for hurricanes is the price people pay for living along the Gulf Coast. Every hurricane season brings a new threat of devastation, and the summer of 2017 is a prime example of the worst the Gulf of Mexico can bring.

Hurricane Harvey was the first of the 2017 Atlantic season and held nothing back. Record amounts of rain drowned the metropolitan areas of Houston and the surrounding cities all the way to the Louisiana border, with Southeast Texas communities being especially hard hit.

It destroyed thousands of homes and took 70 lives in the U.S. Now, as the recovery process begins, people are banding together to rebuild and restore homes, businesses and lives.

We have had to do this numerous times in just the last 12 years. We’ve cleared the debris wreaked across cities from Hurricanes Katrina and Rita in 2005 and Ike in 2008, and have witnessed the relentless Gulf take our homes and our sense of security.

Recovery from a hurricane doesn’t happen overnight. It takes years. Decades. There are still boarded up gas stations abandoned by owners, ominous blue FEMA tarps on vacant homes, and countless trailers in place of where houses used to stand from Rita.

Harvey will join those storms in years to come when survivors recount how they lost their homes to four, five, or six feet of water. The worst part, perhaps, is that so many people are without flood insurance, meaning the reconstruction of their lives is uncertain. No one predicted the massive amounts of rainfall — Beaumont had 43 inches and our neighbors in Orange had 54 inches.

To make matters worse, the high waters disabled water pumps and filtration systems for Beaumont, leaving more than 100,000 residents without potable water. Almost three weeks later many parts of the Golden Triangle are still under several feet of water only accessible by boat.

The only good thing to come out of Harvey so far has been the innumerable amounts of people who have come to Texas from all over the country to help us get back on our feet. That includes the men and women of the U.S. military who have stood in blazing heat to make sure that people got bottled water and food, and the organizations who have been passing out necessities like clothes and toiletries since the storm passed.

While we may be able to take a deep breath now, our neighbors in Florida are cleaning up after Irma, the Caribbean is suffering from Maria and the East Coast is getting the effects of Jose.

As global warming continues, we can expect more frequent and stronger storms.

Hurricane season can be tough, but we have made it through before and we must keep making it through. There have been so many stories as of late regarding the adamant spirit that the residents of Texas have taken in rebuilding after the storm, but in all reality, what else can we do? We have always been resilient and we always will be, so while this may be a dark chapter in our lives, the comeback will be extraordinary.

Hurricane Harvey caused record-breaking amounts of flooding in Southeast Texas, including some flooding on campus. The Wesley Foundation had four inches of water in their building, leaving members to clean out moldy insulation within the walls.

Several congregations from Texas came to aid the foundation with helping hands.

“We came to help wherever we can,” Pastor John Whitehurst of Grace Crossing Methodist Church in Longview said. “It’s been wonderful knowing that we can help rebuild the homes of families that lost everything and being able to just be there for them.”

“The United Methodist Church is extremely connected,” she said. “The churches in our district asked where help was needed and we’re thankful that they came during this time.”

This is not the first time the building has flooded. It has taken on water five other times, each requiring restoration, but Walker says that’s not going to hinder service.

“After we tear out the insulation in the walls and clean all of the mold out, then we can hold our worship services,” she said. “You don’t need walls to worship.” 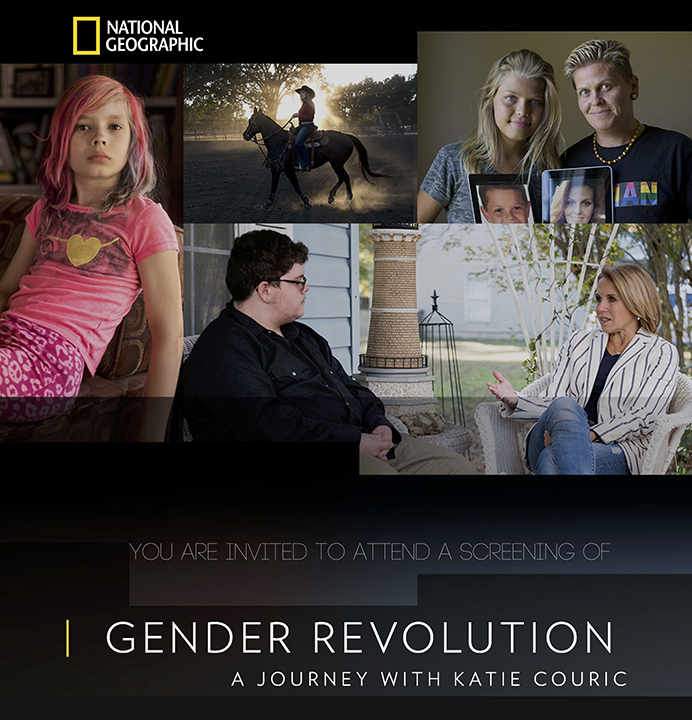 Gender identity used to be so simple. It consisted of male and female and nothing else. Nowadays, there are hundreds of gender identities to choose from. It may seem like a sudden change, but gender has never been just blue for boys and pink for girls — it’s always been a spectrum.

“Gender Revolution: A Journey with Katie Couric,” a National Geographic documentary, explains the rainbow of gender hues in today’s society.

The Beaumont chapter of PFLAG (Parents, Families & Friends of Lesbians & Gays) hosted a public screening of the documentary and a subsequent panel discussion, Aug. 5, at the Theodore Johns Library in Beaumont.

This is the best documentary on gender identity for the uninitiated. The research and scientific facts presented in the film not only gives the viewer greater insight into the science behind the conditions, but also answers many of the most-asked questions.

Gender discussions have become more prominent in the past few years, from Caitlyn Jenner’s Vanity Fair cover to the infamous South Carolina “Bathroom Bill” (HB2) to, most recently, President Donald Trump’s proposal to ban transgender people from serving in the military.

Couric travels across the United States to investigate if gender has changed throughout generations. Her conclusion is that it hasn’t — people are now just more aware and open to talk about their identities.

She strives to explain terms such as non-binary, pangender, genderfluid, transgender and intersex, etc., which are more now more common in media and political conversations.

What strikes one most about this film is the stories of those affected by a close-minded society. There comes a point when people need to stop focusing so much on how others see themselves; society needs to remember that members of the LGBT+ community are humans, too, and shouldn’t be denied basic rights, such as being able to use the bathroom of their choice.

Many people who disagree with the so-called “revolution” regard the conversation surrounding gender identity as contrived to inflate a “liberal-agenda” and disregard it as unnecessary political correctness.

For those people who think that men will start dressing as women to get into girls’ bathrooms, get real. When men decide to attack women, they do it regardless of their surroundings, so why don’t we focus on the sexual assault rates of men who are actually attacking women, and not some ignorant attempt to disguise one’s prejudice.

It’s 2017, why is being transgender or intersex or non-binary, etc. such an issue? America has always been seen as the land of freedom; we’re supposed to be forward-thinking and innovative, but instead we focus on non-issues and cause people to suffer.

An estimated 12 percent of the population is non-gender conforming. Statistically, that means that you will probably know someone in your lifetime that will identify as something other than male or female. This documentary raises awareness of the necessity for acceptance and tolerance in this country. America is divided by these issues because change is occurring, and if history has taught us anything, it’s that change is inevitable.According to the Williams Institute of Law at the University of California at Los Angeles, 50 percent of people who are gender non-conforming attempt suicide at some point in their lifetime. Fifty percent! Not to mention that systemic discrimination leads to an overwhelming proportion of the LGBT+ to live below the poverty line, as well as face higher unemployment and higher risks of violence being brought against them.

People who oppose LGBT+ rights often cite religion a reason, but the First Amendment grants us freedom of religion, which includes freedom from religion, i.e. separation of church and state, leaving that argument invalid.

The documentary covers the spectrum of American life — from small, rural, overtly religious towns to large, diverse cities, showing that gender nonconforming people are just like everyone else — they aren’t a “trend” that will fade away.

“Gender revolution” is unbiased, informative, and offers a perspective on what it’s like to live as a gender nonconforming person in America in the 21st century. It is a film that deserves to be seen by everyone.