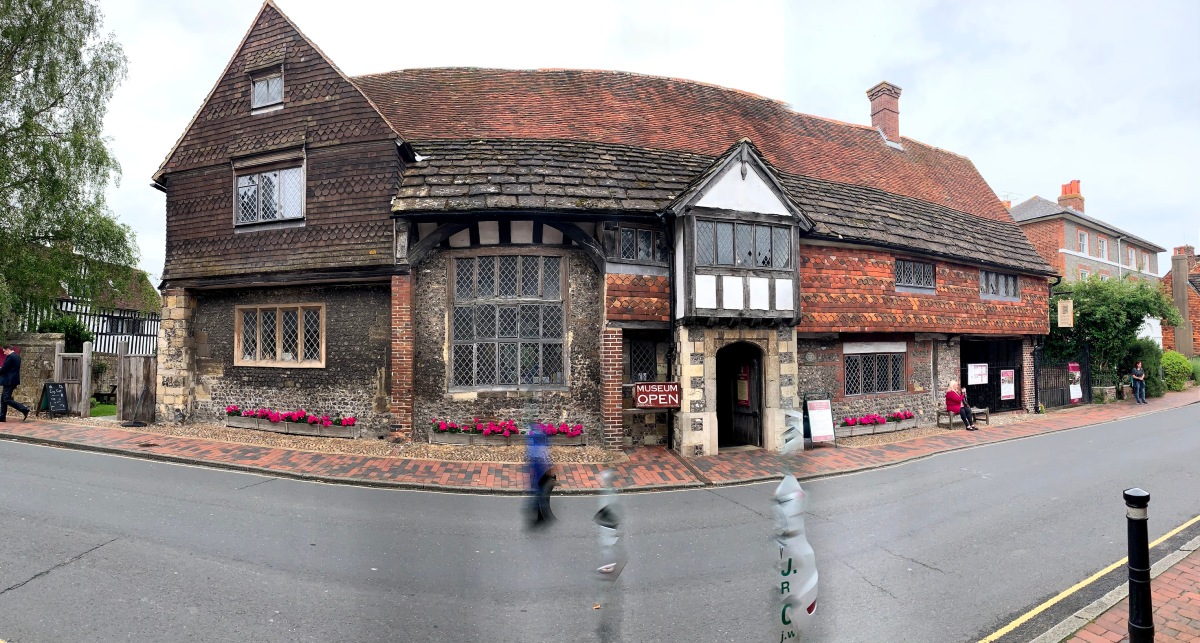 Anne of Cleves, 4th wife of Henry VIII, kept her head, and house, in divorce

LEWES, England — If one had to think of a singular word to describe the Anne of Cleves House, it would be unusual. Unusual architecture, unusual history, an unusual stop on a study abroad trip, but ever so fascinating.

Anne of Cleves was Henry VIII’s fourth wife. Their marriage was short lived, but everything worked out in the end for Anne — something that can’t be said for Henry’s other wives.

“A couple of years after Jane Seymour, Henry’s third wife, died, his advisers, including Thomas Cromwell, started looking for another wife for Henry,” Martin Pelt, visitor service assistant for the Anne of Cleves House, said. “Henry sent (Hans) Holbein, who was his court painter, to paint the picture of Anne of Cleves and her sister. Henry basically fell in love with the picture, and so they signed.

“Also, at this time France and the Holy Roman Empire looked as though they were going to sign some sort of treaty. Henry, having split with Rome, needed to have all the non-Catholic friends he could get, so you could say that was another reason for the marriage.”

Pelt said Henry had an idea to meet Anne for the first time in a disguise so that when she met him, she would fall in love with him immediately.

“It didn’t quite happen like that,” he said.  “What she saw, really, was a dirty old man trying it on, so she carried on — that didn’t go down very well. Henry stomped out. He came back in dressed in purple velvet with everyone bowing to him.”

Henry wasn’t very attracted to Anne and had his eye on Catherine Howard by the time they got married, Pelt said. They carried on with the marriage due to political pressures.

“In the end, they were only married for six months, and because Anne of Cleves agreed readily to the annulment of the wedding, even though she didn’t particularly want to, she got quite a good payoff,” Pelt said. “The payoff included nine manors in Sussex, including Southover, this area of Lewes — and a manor isn’t just a house, it’s all the income and land that goes with it.

“So she had nine manors in Sussex, she had another nine in Essex, three in Surrey, three in Kent, three in Oxfordshire, several in Suffolk, one in Leicestershire and one in Yorkshire. This was giving her an income of between £3,000-£4,000 a year, a huge amount at that time.”

The settlement amounted to approximately £2 million in today’s money.

Anne was also given places like Richmond Palace and Hever Castle.

“These were all much grander places and they were also closer to court,” Pelt said. “So, she had a tendency to live there. We’ve got no evidence of her having lived here. She may have visited. Some people say she didn’t even come to Sussex. However, there’s about five or six houses in the country that have been known as the Anne of Cleves House, two of them, this one and another one in Ditchling, are only around 10 miles apart. Why would they have been called that or been linked to her if she hasn’t had some connection, if she hadn’t turned up there at some point?”

Anne was also given the title of the “King’s sister,” which made her the fourth most important woman in England at the time, Pelt said.

“It sounds a bit weird, but in Tudor England the hierarchy was important,” he said. “This gave her an official position, only below whoever the queen was at the time and Henry’s two sisters, Elizabeth and Mary. With the income, she was also a woman of independent means, which was unusual at the time. She could’ve gotten married, but didn’t. My thoughts there are that if she had, everything would’ve gone to the husband.”

Anne eventually outlived all of Henry’s other wives, and was the only one buried in Westminster Abbey. When she died, her properties reverted to The Crown, including the Lewes house.

“It went to the Saxby family who made a lot of different alterations to the house,” Pelt said. “They had aspirations of gentry, I suppose. They spent a lot of money on the house.”

Brewing was, and is, an important industry in Lewes, so the house was also passed down to several maltsters, Pelt said.

“It was once said that Lewes had seven churches, seven breweries and 70 pubs,” he said. “As the house progressed and deteriorated, it turned into a number of tenements in Victorian times. There were up to 30 people living in the house.”

The property was owned by the Verrall family for 120 years before Frank Verrall donated it to the Sussex Archaeological Society in the 1920s. It’s been used as a museum ever since.

“Much of the original footprint of the house remains to this day,” Pelt said. “Parts have been demolished or rebuilt, but this house has been here for more than 500 hundred years.”

Maintaining such a storied property is expensive, Pelt said, and restoration and conservation efforts are paid for by admissions and the Sussex Archaeological Society.

“This house is connected to a lot of Lewes history, and to one of the most infamous kings of England — it’s quite unique,” Pelt said.

Above: a slideshow showcasing the design of pages in which this story was featured.